My father, Ray B. Moor served in World War II with the 2nd Marine Division on a 105 mm howitzer crew. He also fought in the Korean War with the 1st Marine Division. It is a remarkable and unlikely thing that he survived and his family lives on in myself, my sister, and our children. I write today to honor him and my other fellow veterans, many of whom, like my father, had to deal with PTSD, regret, and grief.

Ray B. Moor died 23 August, 1989 in Astoria Oregon’s old Columbia Memorial Hospital building. I still have dreams with him alive and well in his early forties when he could still climb a 90 ft. pole as a telephone lineman for Pacific Northwest Bell.

As a veteran and a father myself, I look back from my 62nd year of life and remain proud of having served in the U.S. Air Force. As a pilot, I flew EC-135s for the 4th Airborne Command and Control Squadron as part of the 28th Bomb Wing out of Ellsworth AFB, and KC-135s for the 909th Air Refueling Squadron as part of the 376th Strategic Wing out of Kadena AB on Okinawa Japan.

He joined the Marines at 19 to fight the Japanese in WWII. He fought with the 2nd Marine Division, fighting at Tarawa, Saipan, Tinian and as reserve at Okinawa where he endured Kamikaze attacks aboard a troop transport. On Tarawa he saw thousands of men die on an atoll he said, “You could throw a rock across.” He came in with the 10th Marine Regiment, 3rd Battalion, as part of a 105mm howitzer crew and provided artillery support.

On Saipan, he fought in some of the heaviest combat in WWII during Lt. General Yoshio Saito’s final, desperate bonzai charge. The 10th bore the brunt of the attack, with the 3rd and 4th battalions holding their positions after the attack overran two Army battalions. Because the Japanese got so close, as PFC Robert A. Olsen (pg 230, Follow Me, Story of the Second Marine Division in WWII) said, “The gunners of the pieces were firing at less then 4/10th of a second, time fire. When the fuses could not be set fast enough, they fired ricochet fire, by lowering the muzzles and bouncing the shells off the ground. . . .”

Dad told my sister and I many harrowing combat stories: of .50 caliber machine gun fire literally tearing Japanese soldiers apart, of sitting in a foxhole during an all-night mortar attack with a bloody, chunky rain of his exploded buddies falling on him. Though that event stayed with him permanently, as did accidentally shooting a Japanese prisoner in the head at no more than arm’s length, we heard it as though watching a great adventure movie. He kept the photo of the soldier he killed. Taken before the war, the photo included the dead soldier’s wife. I still have it. 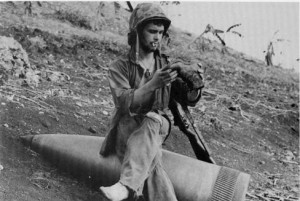 One of my favorite photos as a kid from Follow Me! History of the 2nd Marine Division WW II (Not Dad)

As he neared death, succumbing to prostate cancer, he retold many of these stories. This time, however, he did not leave out the terror, regret, or overwhelming guilt at having survived. I’m sure the retelling with authenticity provided some relief, a coming to terms with his life. I did my job as his son, preparing him for death, knowing he had done his job as a father. He died peacefully, and I suspect relieved it was all finally over. He adored Adrienne, my wife at the time, and our 3 year-old daughter Talus. Adrienne considers him her father, though she knew him only a short time.

My father did his job raising my sister and I, despite having to deal with PTSD and divorcing our alcoholic mother. Though we found life with him rarely easy, we knew he loved us. As a fierce warrior, well tested in battle, he could protect us and we worshiped him. After the divorce, caring for us alone, he would wake us up each morning playing reveille from a sound effects record. If we didn’t get out of bed soon enough he’d play the battle sounds at full blast. I’d wait just so he would play the battle sounds. He taught us to make our beds so you could bounce a nickel off the covers.

I sure miss him. As the veteran I am now with my own children living their own lives, I feel his presence, providing an important part of my core strength.